Fat Roland's Christmas message: just like the Queen's but with more poopy baubles 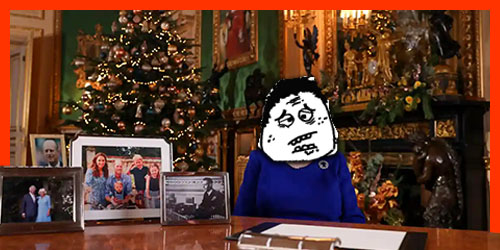 Christmas is a lovely time of year when a reindeer does a plop on your baubles and Santa cheerily throws an elf onto an open fire.

I would like to wish all of my subjects a merry Christmas. And by "subjects", I mean you, my reader, because you subject yourself to all this grammatical hot guff every time you visit my website. Thank you for downloading my words into your brain.

This year has felt quite bumpy, according to the Queen. She should know because she has been feeling up the year when nobody's been looking. April felt squishy, and there was a distinct undulation to August. It's the kind of thing royals get up to. Disgusting, if you ask me.

I'm pretty immune to the annoyances of Christmas. I don't have parents, so there's no-one to argue with about Brexit while passively-aggressively chewing undercooked sprouts. And I don't have a television, so while you're bombarded with a gaudy torrent of Chrimbo ads, I'm just staring at the patch of carpet where my telly used to be. Bliss.

That said, it can be a lonesome time because everything's so family-oriented. Most Christmases, I delve into creative projects and spend as much time with friends as possible. January and February should have their own Christmases so we can continue to distract ourselves from the dank cold with booze and pals and shiny things.

The other day it occurred to me that "ho ho ho" is "oh oh oh" backwards, which is a lyric from Beyoncé's Single Ladies. I'm not quite sure what to do with this information, other than posit that Father Christmas is the opposite to Queen Beyoncé. The Anti-Bey, if you will. Next time you're sitting on a Santa's knee, ask him if he hates Beyoncé.

What's my advice for Christmas? Don't stand in your chimney place because if Santa comes down at the wrong angle, you're going to find yourself right up Father Christmas's butt. No-one wants to spend the festive season wedged up Santa Claus, no matter how Christmassy you're feeling. Not that anyone has chimneys anymore. Or butts. I blame Brexit Britain.

In summary, festive fiddlesticks to you and your loved ones. Maybe have a read of this 2006 Xmas Q&A in which I (a) still annoyingly call Christmas "chrimbo" and (b) seem to promise never to mention Christmas again. Oops.

Further Fats: Christmas chart battles and the chamber of echoes (2014)

Email ThisBlogThis!Share to TwitterShare to FacebookShare to Pinterest
Read more on: beyonce, christmas