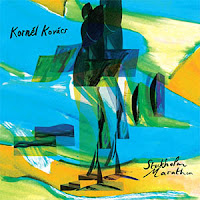 For the last time in this best albums countdown, let's park the rollercoaster for a moment and smell the candyfloss. Here's a longlist of music heavyweights who failed to make the final cut: they're totally good and brilliant, but I kicked them to the kerb like a sassy Simon Cowell.

First up in this best-of-the-rest is Kornél Kovács and the thoroughly likeable Stockholm Marathon (Studio Barnhus). What starts as sugar-sweet vocal pop becomes a sun-glazed soup of instrumental  earworm after instrumentalearworm. Not that I'd drink a soup filled with worm ears. It sounds disgusting.

Jacques Greene got his epic on for Dawn Chorus (LuckyMe), which balanced the bright boldness of Jamie Xx and the scuzzed darkness of Clark. Jenny Hval dived into some sparkly electronics on The Practice Of Love (Sacred Bones Records), a seventh studio album fired off while writing a novel – hashtag multitasking. And Signals Into Space (Les Disques du Crépuscule) was the soft-focus return of Ultramarine, techno's answer to Channel 4's Watercolour Challenge.

The ever-filmic Amon Tobin was in an ambient mood on the intricate Fear In A Handful of Dust (Nomark). Flying Lotus was as generous and as overwhelming as ever on Flamagra (Warp Records), a work pepped up with a strange appearance by David Lynch. And although I thought Modeselektor's Who Else (Monkeytown Records) was a mixed affair, there was enough fried gold to make this longlist.

And finally here are some giants of electronic music who I've consumed in small portions in 2019, but haven't absorbed enough to include in my final list. Because I can't knowingly give full recommendations, I shall describe each album with a meaningless simile. James Blake's Assume Form (Universal Music) was like a hot toaster on a day trip to a dog-strewn beach. Hot Chip's A Bath Full of Ecstasy (Domino) was like a hovercraft balancing atop the concept of green. And finally, Metronomy's catchy Metronomy Forever (Because Music) was like a metronome catching the metro with a, er, gnome, um, er, jeez, this is worse than the fruit puns. *destroys computer with chainsaw*