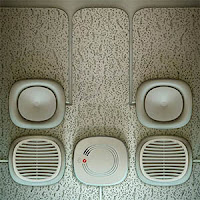 Joy Division. The Beatles. 808 State. Three bands that made their television debut at Granada Studios. And which of those three would you like to see again on television? What? No, the answer's 808 State, you toss-brain.

The Balearic boys are back, and everything sounds like they're in a decaying television production room, with crackly monitors, computers fizzing in the dust, endless corridors of wires that may or may not lead somewhere. Transmission Suite is, above all, a mood piece.

There's a cold war level of paranoia too. Just who is that Japanese radio voice addressing on Tokyo Tokyo? Why is the American guy so regretful on the the loping Cannonball Waltz? Are those congas closing in on us during Ujala? Yargles.

There's still time for the classic 808 State sound in the cheery lift music of Skylon and the careening rave chords of Trinity. But considering their 17-year hiatus, and a theme that harks back to the days of Tony Wilson on telly, Graham and Andy have produced a fantastically forward-thinking album.