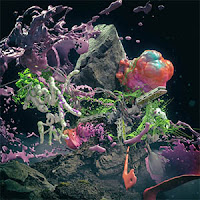 The reviewers have waffled a lot about light when writing about Ways Of Seeing, and they're spot on. Its like Konx has opened all the windows and sun-bleached his murky sounds. The darkness is still there (the sudden declaration of "overdose!" on LA Melody), but these are shadows in daylight rather than shimmers in the night.

The album's also informed by Konx (his real name is Tom) moving to Berlin, and there's something notably European about the smooth flow of Nightwave collaboration I'm For Real. He also spent some time in Clark's studio, and I think some of the giddy looseness of the production could be testament to that.

This has proper cheered me up, sitting here in my Manchester living room with all this LA-inflected beatsmithery drumming into my ears. I'm off to put the big light on.