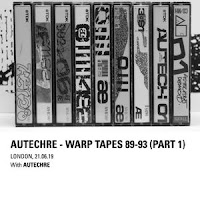 Soon, we'll get our teeth into the top 20 best electronic music albums of 2019, like a narwhal savaging an unsuspecting squid. But first let's get some special mentions out of the way.

When I compile my list, I have a set of fuzzy rules in my head. To be included, an album must be in the vein of modern, post-Aphex electronic music, but that leaves things pretty wide open. Nothing too poppy, although the list has pop elements. Don't genre-jump into hip hop, although the list will certainly have elements of this too.

I also try not to include compilations, although watch me break this rule almost immediately with the album I've placed at number 20. This does mean there's no space for Burial's Tunes 2011 to 2019 (Hyperdub) nor for Autechre's Warp Tapes 89-93.

I've also been strict about the definition of an album, so I'm sadly not including the return of Andy Stott on the EP It Should Be Us (Modern Love) nor, controversially, am I including Underworld's spectacular and impressive Drift project because there's so much of it, it would have ground this process to a halt.

And finally, I have a new rule: if I don't like it, I won't mention it. In previous years, I thought it was important to be comprehensive and I included in my longlist albums that I wasn't interested in but were important enough to mention. As if I this site was some kind of electronic music almanac rather than just a daft writer in his underpants mashing a keyboard with his fists. Why recommend something I'm not bothered about?

So from now on, if I'm not keen on it, it doesn't get a mention. Sorry, Tycho. Sorry, DJ Shadow.

Scroll the full best-of-2019 list here (as and when it appears).