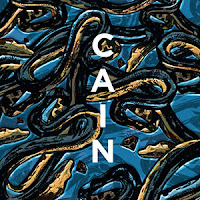 I've been anticipating Cain's debut album since this blog post in 2015. "More of this playfulness!" I demanded like a spoilt king firing chicken bones at a jester's feet. And finally, the former bagpipe playing highlander has dropped that much-anticipated debut.

Except it's not what I expected. The Collection, as its title suggests, is a collection of his pan-global dance music that's been piling up over the past few years. I'd rather be reviewing a proper studio album rather than a compilation, but I'll take what I've been given — because this is great.

The beats are metronomic, such as the 4/4 clonks on Eshu. This could be alienating, but a ghostly African chant or a shashaying sitar is never far away. It's a globe-hopping experience, and yet when a snaking acid line drops, such as on Gordito, it never seems out of place.

There's no-one else out there like Cain: it's so damn fun. The jester is dancing and I like it. Now can I get out of these king robes, please? There's some serious chafing going on here, and the crown doesn't match my eyes.