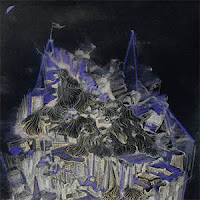 It's him. Y'know. That bloke. The guy from Kiasmos, the band that had the best album of the decade. No, you're confusing him with the drummer from Genesis. No, that's Frank the window cleaner from number 42. Oh never mind.

Janus 'Kiasmos' Rasmussen's first solo album Vín is incredibly pretty. It's as pretty as a nice vase that has a really pretty design on it. I'm not good at describing vases. The melodies are simply layered, the beats driving: it's an attractive journey from A to B.

What lifts it is the IDM warmth to the drums and the dual sensibility of classical and club that made Kiasmos so compelling. Here, the energy is almost euro-beat; sequences in primary colours that feel made for a truly international audience. And it's delicately dynamic: listen to the way the summery eight-bar melodic loop of Lilla splits into layers as the track progresses.

A fine-sounding work. Unlike Frank the window cleaner who looks the offspring of a bin lorry that's mated with the scraggy dog that hangs outside the launderette. At least trim your forehead hair, Frank.